The fantastic history of the hot air balloon

Since we first observed birds and insects in flight, humans have been fascinated with taking to the skies. Flying has fuelled our imaginations for more than 2 000 years, so much so that ancient Greeks immortalised their dreams of soaring through the clouds in myth.

Thankfully aviation has come a long way since Icarus and his feather-and-wax wings; nowadays, our jets are supersonic and our passenger airplanes fly themselves. But while these aircraft might satisfy our need to get around, there is still no form of aviation as romantic as the hot-air balloon.

Head in the clouds: the invention of the hot air balloon

Early of the origins of the hot-air balloon can be traced back to China, where paper lanterns filled with air heated by candles were used for signalling. Unfortunately, humankind would have to wait until the 18th century before this idea would really take flight.

After observing how a piece of fabric billowed in rising hot air, brothers Joseph-Michael and Jacques-Etienne Montgolfier began to experiment with lighter-than-air craft. They fashioned a balloon from silk lined with paper and launched their rudimentary airship from Annonay in France on 4 June 1783.

The ballast rose to approximately 6 000 feet and stayed afloat for 10 minutes, travelling two kilometres. The demonstration attracted the attention of the Académie Royale des Sciences, which asked the Montgolfiers to show their experiment in Paris.

Up, up and away: the first hot air balloon flight

For their first official public display, the brothers built an alum-coated taffeta balloon, making the craft both light and fireproof. They enlisted the help of wallpaper manufacturer Jean-Baptiste Réveillon, who decorated the sky blue ballast with golden flourishes. Once a basket was attached, the balloon was ready to carry its first passengers.

On the 19 September 1783, in front of a crowd of 130 000 that included King Louis XVI and Marie Antoinette, the Aerostat Réveillon took to the skies with a sheep, a rooster and a duck on board.

The flight lasted for a full eight minutes before the balloon began to sink, owing to a rip in the fabric. Back on land after their 1 500 foot ascent, the animals were examined by physician (and future aeronaut) Pilâtre de Rozier and found to be in good health. They were immediately hailed as “heroes of the air” and given place to live in the Versailles menagerie.

With the knowledge that the flight was safe, Pilâtre climbed into the basket on 15 October 1783 and became the first man to be borne aloft when the tethered balloon floated 24 metres above the ground for four minutes. The first free ascent followed quickly after the tethered attempt, with Pilâtre and Marquis d’Arlendes flying 9 kilometres from the centre of Paris to the city’s suburbs in a 25-minute trip. 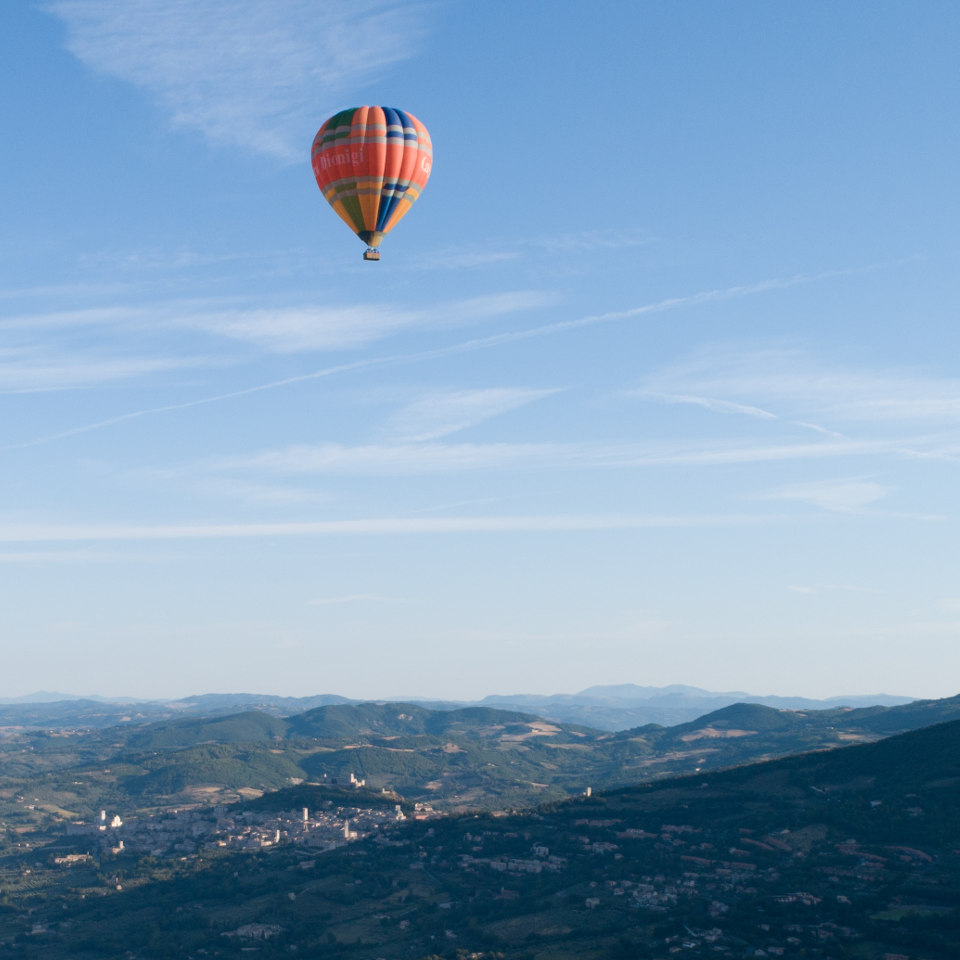 Realising the limitations of using air to inflate the balloons as well as the risks involved, balloonist Jacques Alexandre Lésor Charles had begun experimenting with hydrogen. Less than two weeks after the first untethered flight, Lésor successfully launched an airship inflated with hydrogen and secured the hot air balloon’s place in aviation history.

On 19 January 1874, shortly after the discovery of hydrogen-fuelled flight, the Montgolfiers launched a balloon carrying seven passengers from Lyons. The airship rose to an astonishing 3 000 feet and caused a sensation across France and the world, prompting the production of balloon memorabilia from crockery to clocks and chattels.

Since then, balloon travel has been inspiring fictional and real-life adventures alike from breathtaking heights, giving explorers, adrenaline junkies and romantics a chance to fulfill their fantasies.

Experience the magic of a hot air balloon flight in Italy with Balloon Adventures Italy.